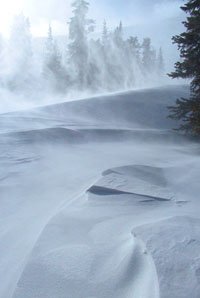 Blowing snow is the meteorological term for any loose snow lifted from the ground surface and suspended by strong winds to a height of 2 m (6 ft) or more above the surface (higher than drifting snow), and blown about in such quantities that horizontal visibility is reduced to less than 11 km (about 7 miles). Blowing snow can be falling snow or snow that already accumulated but is picked up and blown about by strong winds. It is one of the classic requirements for a blizzard. As an obstruction to vision, it is encoded BS in a surface aviation weather observation and as BLSN as an obstruction to vision in a METAR report. 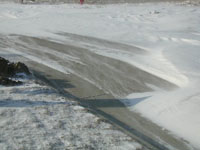 Drifting snow is only raised from the ground surfce by the wind to a height of less than 2 m (6 ft) creeping, rolling and bouncing above the surface. While drifting snow is not regarded as a vision hazard for aviation it is a major hazard for surface transportation. The combination of near-zero visibility and drifting snow can cause unexpected travel difficulties and accidents in remote areas during dangerously cold winter weather situations.