On July 24, 2010, the administrator of the U.S. National Oceanic and Atmospheric Administration (NOAA), Jane Lubchenco, provided a briefing about the anticipated impact of Tropical Storm Bonnie on the Deepwater Horizon oil slick in the Gulf of Mexico. Bonnie was expected to help dissipate and weather the oil on the sea surface, spreading out the slick, lowering surface concentrations, and making the oil more amenable to biodegradation. On July 28, 2010, after Bonnie had passed through the region, NOAA reported less oil observed on Gulf of Mexico overflights. 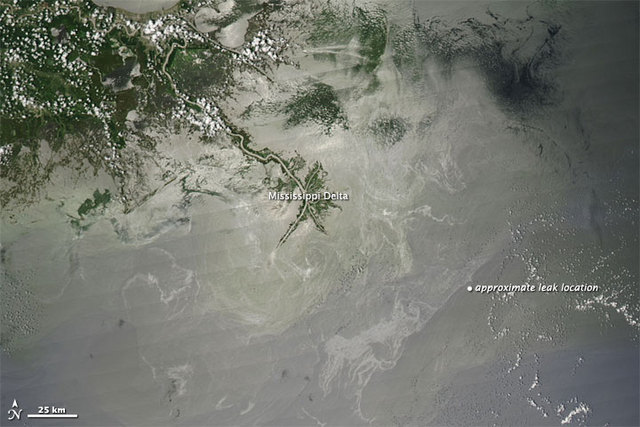 The Moderate Resolution Imaging Spectroradiometer (MODIS) on NASA's Aqua satellite captured this natural-color image on July 28, 2010. Around the location of the oil leak, and around the Mississippi Delta, relatively light swirls and patches appear on the ocean surface. These areas might be oil slicks, although other factors could affect the water's ability to reflect sunlight, especially near the shore. If these pale-hued sheens are oil-slicked areas, they contain very little recoverable oil, according to NOAA.