Nearly a month after a deadly explosion at the Deepwater Horizon oil rig, the damaged well on the bottom of the Gulf of Mexico continued to spill oil. In the weeks since the accident occurred, the oil slick has periodically drifted northeast toward the Mississippi Delta and reached the Chandeleur Islands. 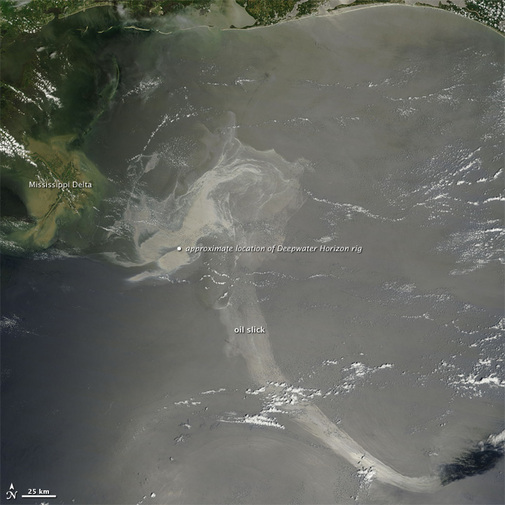 On May 17, 2010, when the Moderate Resolution Imaging Spectroradiometer (MODIS) on NASA's Terra satellite acquired this natural-color image, a large patch of oil was visible near the site of the accident, and a long ribbon of oil stretched far to the southeast.

Oil slicks are not always visible in natural-color satellite images. A thin sheen of oil on an already dark background may be impossible to detect. On this day, however, the slick was located in the sunglint part of the image, which makes the slick stand out.

Sunglint is the mirror-like reflection of the Sun off the water. If the ocean surface were as smooth and calm as a mirror, a series of perfect reflections of the Sun would appear in a line along the path of the satellite's northeast-to-southwest orbit. Instead, waves blur the reflection, creating a wide, washed-out strip through the ocean.

A coating of oil smoothes the sea surface relative to the oil-free water, causing it to reflect light differently. Depending on where in the sunglint area it occurs, the slick may look brighter or darker than adjacent clean water. In this image, the slick appears as an uneven shape of varying shades of bright gray-beige.